skip to main | skip to sidebar

I just took Daniel to the airport AGAIN after yesterday's mishap of misunderstood texts from the airlines...it was great to have him home.  He has a personality that is closest of that to Simon...changing the cat's name while he was here, not paying attention to whether or not there was already a salsa open in the refrigerator before opening another...and another. He was in my bed nightly for ticklies and infiltrating Simon's space whenever possible, being a complete irritant of Izik AND Simon but NOT OLIVIA (unbelievably :).  Fortunately, he and Dylan have always kept a mutual respect for one another which has always been a comfort in the midst of chaos. I heard Daniel ask us almost every day if we would reconsider Chipotle and couldn't the news of their using GMO possibly (and hopefully) be incorrect...to which we said no and wouldn't budge and neither would he in his persistence ;)

He will be back for his break next Wednesday while many of his team will be in Alaska for JO's (junior olympics) testing their hard work and anticipating the pay off of a national title.  He expected to be there too but God chose another route for this season.  He chose personal growth over accomplishment.  I understand how difficult that reality can be.We feel as if we are stuck, and while it seems any effort we attempt, we are unable to make a move, but at the right time, which is God's time, we are thrust into our purpose and His promise. While Daniel's teammates are skiing in their final competitive venue for the season with the best of the best in the country, Daniel will be having his assessment with Dr. Buhler and his A.M.I.T. (Advanced Muscle Integration Techniques) and subsequent treatment sessions and God willing he will be on the snow by the summer (and he is hoping sooner) ...ME TOO! But yet we have to wait...and trust.

The new aspect of Daniel being off the snow this year that is such an indicator of him not living his passion is not his restlessness he typically has when he is not skiing, but this year it is the uncertainty of his ability of when he can re-engage. He is usually so satisfied during the winter and so confident of what he can do each day as he has always been able to work toward his goals. This year I am reminding him of how well he is doing academically which certainly has impressive merit in and of itself, although I appreciate that he wants more regarding his achievements.

This winter had its challenges for all of us.  For Daniel, it was a season of moving across the country and settling in a foreign land with strangers so that he could pursue his passion, but sadly his injury left him disappointed and struggling to keep his perspective.  On our end, while we too moved and acclimated to a new life in a new land and with new hope and expectation, we felt much like the Israelites, shuffled and disheveled but looking at our promised land with enchantment and enthusiasm as well as anticipation but not without feeling the pains of the afterbirth.  While most of the experience has been fresh and exciting and filled with satisfaction, it is still bittersweet.  I have learned though, that it is within those transitions of life it is critical to remember that it matter not whether or we feel the pressure of an oppressive world upon us, we must keep our focus upon The One who gives us our passion and our purpose.  What He has ordained for His purpose, will be accomplished according to His plan.

I find the two distinct paths inseparable:  Daniel's personal journey and our entire life...they are analogous and critically parallel but yet there is a difference.  He is traversing and expecting to conquer the land without the knowledge of experience and we have been scalded by ours,  but one thing remains the same and even continues to grow for both of us and that is our faith.  We walk it out according to His call.  We trust Him. We look ONLY to Him for our placement, our position and our provisions.

Daniel's faith is being defined and ours redefined.  In both of our interpretations and at every level, our God is to be trusted and He has proven Himself in countless ways in our life.  He will prove Himself in countless ways in Daniel's life as well.  It is exciting for me to know that and watch it play out just as I knew God was up to something very big with our challenges.

I see his anticipation and hear his heart and know he is disappointed beyond his understanding and even struggles with how to interpret it but I see his smiles and his projections regarding his future and I know it is well with his soul.

I got a glimpse into his heart the other day when he attempted to ski this weekend and had to quit because he ankle hurt but his dad and his brothers continued to have the best day of their life on fresh powder.  I asked him when he came home if he was disappointed and he said, "I am not worried about not skiing 'for days' but about not being able to ski next year." I realized in that moment that while his body may not be keeping up with his desires, his heart and soul are learning irreplaceable life lessons that will shape not only the boy, but the man.  I reassured him that God has this and He often calls us to walk through difficult circumstances for purposes, that while not visibly seen, are necessary for His call upon our life.  I reminded him that we are going to seek the best for his success and while his body may be growing more quickly than certain parts can keep up with which creates added stress and unique situations in which he cannot adapt to at this particular time, it is also a miraculous vessel and its healing potential is infinite when we get to the root cause (which we are about to do).  Even typing that thought reminds me that is even true of our own bodies in their growth.  Our minds receive but it is required of our hearts to listen.  That is often extremely difficult to accomplish when our hearts are not in understanding of how to do so.  And again we are faced with entering a place of surrender and trust...and that requires patience.  At different stages of life, various parts of the body are required to grow in their function. Daniel's journey/our journey...both watching and waiting upon God.

While I may not have seen "contentedness" from him as I usually do in this winter season, I have absolutely seen growth, maturity and elements of him becoming a man...an impressive man :)  And when he asked me if we were going to church on Sunday, I knew that this child, is seeking not just the reassurance of his mom or dad, but of his Father, his Abba Father. 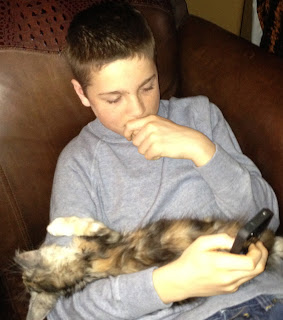 Not only so, but we also rejoice in our sufferings, because we know that suffering produces perseverance; perseverance, character; and character, hope. ~Romans 5:3-5
Posted by Unknown at 2:09 AM No comments: 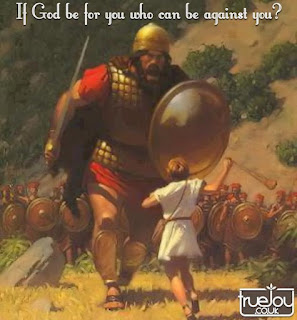 There are times when the only way to get out what you feel is to sit down and process it.  As someone who has very little focused energy unless I am writing, this is where I express my heart and watch the words hit the screen and I often wonder where they came from.  I know what is in my heart, perhaps too much so as it leaves me feeling incapable and frustrated, but quickly replaced with that feeling is what matters far more:  KNOWING that I am chosen for purpose, that while my journey has left me scarred and at times continues to wound me, I KNOW that as a daughter of the King, I will ALWAYS triumph.  He trusts us.  I take that very seriously.  I may not always know WHAT I am doing, but I do at least always know WHY I am doing it.  At times that fact is a reality check and at times it gives me comfort...especially in times such as we have lived through most recently, where our best efforts were mistaken, misunderstood, maligned and maliciously misconstrued.

I don't focus on them as they were the springboard to a greater purpose.  I have often said that those who meant to harm us should be written a Thank You.  While there are endless ways that the enemy relentlessly tries to sabotage, especially when we are so on purpose, our focus MUST stay in ONE place and that is on the power of ONE...the ONE who created us, our purpose and our ability to feel the sting of life as well as the victory when the enemy is defeated.

I read something in my Bible this morning and while I have tossed many emotions around in my head in recent weeks, I was even more excited by what I was reminded of in Psalm 71. Beginning in verse 20, it reads:  Though you have made me see trouble, you will restore my life again; from the depths of the earth you will again bring me up. You will increase my honor and comfort me once again.
Verse 23-25: My lips will shout for joy when I sing praise to you--I, whom you have redeemed. My tongue will tell of your righteousness all day long, for those who wanted to harm me have been put to shame and confusion.

While this is something I know and trust in, waiting for God's timing is the most difficult.  We cannot expect Him to move according to our desires and based upon my past experiences, I know that it is ALWAYS worth the wait!

Righteousness is the basis of the reign of God.  It is not ours, but His.  Remembering that is what will sustain our patience as well as see the demonstration of His power when it is unleashed.  He wants us to depend upon His strength and not our own.  I believe that is why at times we feel so ill-equipped and He puts us in situations with "giants."

We always have a choice: to focus on the "giants" or to give the One who created them as well and knows their hearts, the opportunity to move on our behalf.  I am reminded of Joshua and Caleb who went to see the promised land and while it was flowing with milk and honey it was also filled with giants.  Most focused on the giants, but Joshua and Caleb focused on God and the opportunity ahead.  God honored their faith.  They received the land. The others accepted the report of the majority and it created fear in them and they never received the blessing God had for them but Joshua and Caleb trusted God and they experienced the fullness of the promise.

While I have scripts in my mind and things I would love to say and do, and in some way work toward my own vindication, I realize how important it is to wait.  Waiting without action is not apathy when we are waiting on the One who controls our destiny and teaches us as we trust Him. 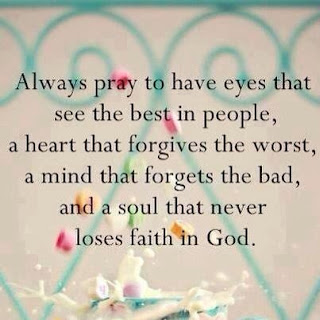 It doesn't matter who likes you or who doesn't.  The main thing is, Almighty God likes you.  He has accepted you.  He has approved you.   ~Joel Osteen

Posted by Unknown at 5:48 PM No comments: 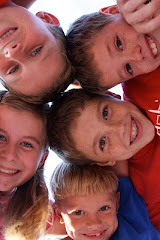 me and the man on the mission 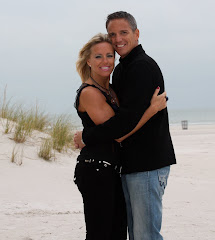